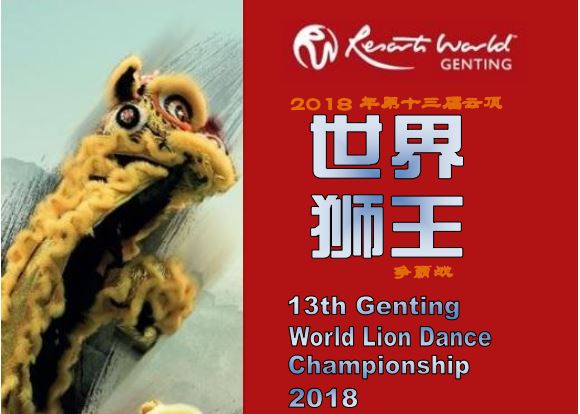 The USDLDF is excited to announce that our organization has been officially invited to send the winner of our Freestyle (Jongs) Lion Dance Championship to represent the United States at the 13th Genting World Lion Dance Championship, held at the iconic Arena of Stars, in the beautiful Genting Highlands Resorts, Malaysia.

The Genting World Lion Dance Championship is a biennial event, considered to be one of the most respected and iconic tournaments in the lion dance world. Organised by Resorts World Genting, along with the Federation of Selangor & Federal Territory Dragon & Lion Dance Association, this amazing event is held over a period of three days with qualifiers being held on the first two days and the top 10 teams advancing to the finals, on the last day, for the chance to challenge the defending champion team for the title of World Lion Dance Champion.

The event included, in its last edition (2016), participation from over 35 teams representing 15 different countries. The Championship also has a East and West Lion King special trophies for the best team representing the eastern nations and the best team representing the western nations, as well s the runner-ups in each category. With such a diversity of nations being represented, this event highlights the lion dance as a cultural art form and sport on a truly international level, all while encouraging sportsmanship, friendship and harmony among the various teams and athletes.

So get your team registered, ready and working on their Jong (high poles) routine to compete for this amazing opportunity to represent the United States at the biggest most prestigious Lion Dance event in the world!

NOTE: In order for the 1st USDLDF National Freestyle (Jongs) Lion Dance Champion team to represent the US at Genting, the team must be a registered member of the USDLDF on or before May 25th 2018.